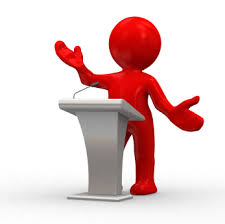 talking about Public speaking, i would like to share a story of my Public speaking class...it just a shock to attend the class when the lecturer suddenly started to call matric number..
everybody seems forget their matric no.. urgh...
i know, this must be an order to give a speech in front of 200 students..
Yes..it is true... all 10 of them have to give a speech on each topic given..

maybe, it is just familiar but seeing a varieties of people with their anxiety...make me think...

the first speaker called,Arief. he was given a topic dishes in Malaysia.
i know him and his potential very well. we are in the same class and we are quite close..so, as expected, he done very well... madam also praise her..

*correct :  we have to use the english fluently and do not mix them with our slanga

but, when it comes to the second speaker.. she was a girl..her name is atul..given a topic "my neighbour". she got a high anxiety to speak.. she just stand near to rostrum and look toward her paper.. it seems that she would reading, but, after saying 3 sentences..she stop..
her eyes seems red and going to burst out a bucket of water..but she able to control it.. so, she ask to madam for an excuse..to have her sit first, her leg seems very weak to stand...

*correct :  try to see in different corner and just act that your look at the audience but the truth is,     you look at an empty chair or an empty corner or only their chair or hair only

*correct :  try to speech in front of mirror or by your own everyday..hehe

the third speaker is different. he come to the front confidently. he was smiling and stand bravely. I know that he always come to the front to give a tazkirah. He started to speak and explained..but, till the end of his speech. i did not get any point. he seems thinking and searching a vocab while he was speaking. he say and repeat the same point and vocab.

*correct :  although we have no fear to speak in front of people, but, with no preparation, no structured point..we could be very worse

* correct : in any presentation, the language always be the barrier... even if you are good in public speaking, you could be a worse person at the front, if you could not deliver the point very well...
so? keep up reading and speaking in that language..then, you would be better and improved...
ignore those people who laugh at you and fight with the shame in your heart..okay? 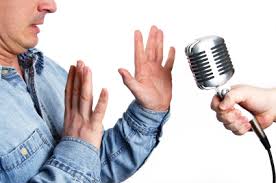 looking at OBAMA winning the election at America.. I know he deserve..
WHY ??
He able to speak convincingly...is it?
people would say, " it is normal to be a politician " ==> they have to speak very well... is it true?

actually, do you know what actually Public speaking is ?

Public speaking is the process of speaking to a group of people in a structured, deliberate manner intended to inform, influence, or entertain the listeners. It is closely allied to "presenting", although the latter has more of a commercial advertisement connotation . ( http://wikipwedia.org )

why did people are afraid to speak?

it is because of their anxiety. you know? those who were afraid to speak in front of people also known as a disease. it was called as Social Phobia ( social anxiety disorder)


Social phobia is a persistent and irrational fear of situations that may involve scrutiny or judgment by others, such as parties and other social events.
( http://www.nci.nlm.nih.gov )


why can you get your anxiety ?


Anxiety Disorders affect about 40 million American adults age 18 years and older (about 18%) in a given year, causing them to be filled with fearfulness and uncertainty. Unlike the relatively mild, brief anxiety caused by a stressful event (such as speaking in public or a first date), anxiety disorders last at least 6 months and can get worse if they are not treated. Anxiety disorders commonly occur along with other mental or physical illnesses, including alcohol or substance abuse, which may mask anxiety symptoms or make them worse. In some cases, these other illnesses need to be treated before a person will respond to treatment for the anxiety disorder (http://www.nimh.nih.gov )


i suggest to refer to this website to learn more :
http://www.effective-public-speaking.com/

Posted by Unknown at 9:12 PM No comments:

Grab a Funny Picture from pYzam.com

as long as u know that i need u